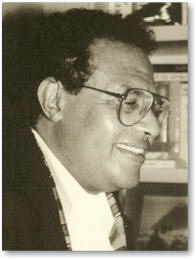 Born in Harlem and raised in Brooklyn, Glenn Thompson left the U. S. as a young man and traveled extensively throughout  India, Europe and Israel before settling in England.  There, he identified immediately with the struggles of poor and working-class people to overcome poverty and illiteracy.  He became a leading activist for socioeconomic and political causes, founding Centerprise, a nonprofit British organization that remains devoted to community improvement and social uplift.  He also began a publishing career, starting out at Penguin Education, then at the cutting edge of radical educational publishing.  He later established, with others, the Writers and Readers Publishing Cooperative (WRPC) he was joined in this idealistic publish venture by leading writers of the day.  Under Thompson’s leadership, WRPC published a number of international bestsellers including the For Beginners cartoon documentary series.  This series began with Castro for Beginners, illustrated by the noted Mexican artist Ruiz.  Thompson later expanded the series to include over one hundred Beginners titles on topics ranging from Karl Marx,  DNA, and JFK to Black women and Malcolm X.

Internal strains led to the break up of the WRPC, but Thompson retained control of its publishing program and moved back to New York in the early 80’s to establish Writers and Readers, Inc. as a U.S. company.  He also reorganized WRPC into a for-profit company in England: Writers and Readers Ltd.  Adding new titles and republishing the successful Beginners books in the U.S., Thompson built an  impressive list of titles.  Influenced by the Black book publishing movement then at its height, he further expanded his list by publishing now-popular authors Iyanla Vanzant and Kevin Powell for the first time.  He also published noted authors Eloise Greenfield, Mari Evans, and author/illustrator Tom Feelings.  Additionally, he established two imprints that focus specifically on Black-interest  titles in diverse genres: Harlem River Press and Black Butterfly children’s books.  Along with Haki Madhubuti of Third World Press, the oldest Black publishing house in the U.S., Thompson helped to organize the National Association of Book Publishers to promote literacy and Black book publishing.  Through his efforts, he became close friends with other Black publishers including Wade Hudson at  Just Us Books, Kassahun Checole of African World Press and Paul Coates of Black Classic Press. Glenn Thompson was an exemplary Black publisher.  He viewed books as weapons of liberation and saw his task as that of a soldier, arming the people to free themselves.  He chose to publish great books about people of African descent that helped to define the reality of the Black experience.  He also chose to publish outstanding books that redefined the White experience from the perspectives of those who were oppressed and dispossessed by it—and he did so in subtle, subversive, but often comical ways.

His last years were difficult ones.  Numerous court battles and financial challenges associated with his trailblazing publishing ventures drained his resources and his health.  Thompson’s earthly transition on September 7, 2001, in the peaceful stillness of a quiet hospice, was made possible by the support of his three children, Shoshannah, Ben, and Elisha; his brother Dennis; other family members; and friends, all of whom lost a brilliant and caring comrade and confidante.  His memory endures through the many significant works he brought to fruition.