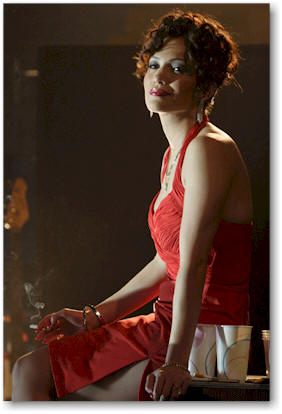 Born in the South Bronx on July 24, 1969, Jennifer Lynn Lopez “J-Lo” has come a long way from her humble roots to her lofty station as an adored pop icon and perhaps the most influential Hispanic entertainer in America. Besides being the first singer/actress to have a #1 movie and #1 album at the same time, J-Lo was voted #1 on FHM’s Sexiest Women list, has been chosen as one of the World’s 50 Most Beautiful People by People Magazine, and is acknowledged to be the richest Latino in Hollywood.

Even though none of her movies has grossed $100 million at the box office, domestically, Lopez nonetheless has enough name recognition to command $15 million per picture. Here, she talks about starring in and producing El Cantante, a bio-pic about the rise and fall of Hector Lavoe, a celebrated salsa singer from the Seventies. Her real-life husband, Marc Antony, handles the title role as is the ill-fated, drug-addicted front man, while she plays Puchi, his long-suffering wife. 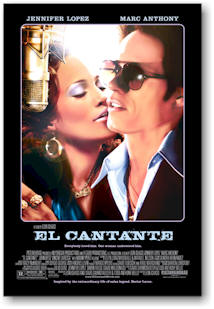 KW: What interested you in making and starring in El Cantante?

JL: This was one of the first things with my production company that I felt like, ’This is something I really want to make. This is something I really want to make.’ The script was brought to me, I guess, about four or five years ago now, through Puchi, who had done interviews with the very first writer on the screenplay, David [Darmstaedter], and David Maldonado brought it to my manager at the time, saying ’Read it, it’s the Hector Lavoe story, and Puchi wants Jennifer to play her.’ I read it, and I'll be honest, much like when I did Selena, I knew of the music, and I knew a little bit of the story, but I didn't know the whole story. When I read it, and started learning more about it, I just became obsessed and impassioned with the whole idea of the project and their lives. And once I really got to know the music, I was like, ’Wow! This is important.’ And then, it being a Puerto Rican story, and my production company being Nuyorican Productions, what better movie to be the first movie for Nuyorican Productions than this?

KW: Was Puchi an easy role for you, given that she’s Puerto Rican and the wife of a famous Latino singer?

JL: No, Puchi was still very complicated for me, because I don't drink, I don't smoke, I’ve never done drugs and a big part of this person’s life was the fact that they were involved with drugs, and that their existence dealt with that a lot. It really started for me once Leon [director Leon Ichaso] took the script and did all his research, and his traveling to Puerto Rico, and his traveling to New York, and doing all his interviews and everything, and re-wrote the screenplay. It came to life, she came to life, and Hector came to life for me, because he’s so descriptive in his writing that even the script itself is a beautiful piece of work. And once I had that template, now I had to go off and do my own research, and find the character myself, because when you play a part, nobody, not even the director, should know that character better than you.

KW: Is this picture just a Latin thing, or will it have a wider appeal? 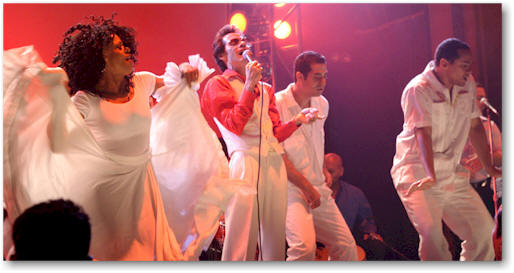 JL: Even though it’s a Latin project and is about Hector Lavoe and everybody involved with it is Latin, I believe that it should be a story that touches everybody and that anybody can watch and understand. You know what I mean?

KW: Yep. But how do you achieve that?

JL: You do that by bringing people into a new world where everybody can relate to what’s happening. So then they have this Puerto Rican world of the Seventies, this revolution that was happening at that time. And they go, ’Oh, I don't know about this world.’ Yet it’s a story they can relate to and say, ’Oh, I’ve been there. I’ve been there in that relationship. I know what that must be like.’ You know what I mean?

JL: That’s when you make a great movie, when everybody can relate to it.