Gone to Where the Bong Trees Grow
by L. E. Rainey

The next time you pick up a picture book written by a contemporary children's author flip through the pages. Take a few minutes to read the storyline and you'll discover an interesting fact--parents are rarely depicted as significant characters in contemporary bedtime stories. It would be fun but, perhaps, a tad bit naive, to pretend that the parents in picture books had followed the lead of the much beloved characters in Edward Lear's classic nursery rhyme the "Owl and the Pussycat" and,

...sailed away for a year and a day, to the land where the bong trees grow.

Edward Lear's The Owl and the Pussycat

In fact, the absence of parental figures in children's literature, and, I'm specifically speaking about picture books written for preschool age children, is largely due to the fallout from past cultural wars which reconfigured the parent-child paradigm. A matter we'll discuss in greater detail shortly. I will now pay homage to the effectiveness of a once popular national literacy campaign, by repeating its slogan to you, "Reading is fundamental". Yes, it is indeed. Reading to young children is one of the primary ways parents help preschoolers sift through and interpret the many images, ideas, and messages transmitted to them from the adult world; bedtime stories help to identify the values which are most important to individual families. In the book, "Inside Picture Books", (Yale University Press, 1999), Ellen Spitz, a University of Maryland Professor of Visual Arts, writes with great insight and passion about the powerful influence picture books have over young children: "In early childhood, the separations among different spheres of functioning are not yet firmly established, and young children come only gradually to distinguish clearly between dreams, fantasies, and waking states, between self and others, between a picture and the thing pictured. Thus, artifacts presented to them make a deep and lasting impression." (Inside Picture Books, pg.2)

You may wonder how parents became casualties of our culture wars in literature. If you believe as some educators and sociologists do, that childhood is a creation of social institutions which, to keep things interesting, evolve from time to time and learned experience (all of this coalescing into a sort of perfunctory "civilizing process"), the blame for the bit roles parents play in modern children's literature lies--well--with adults. Famed scholar Henry Jenkins, Director of the Comparative Media Studies graduate program at the Massachusetts Institute of Technology (MIT), made the following observations about children's fiction in his article entitled , "'The All-American Handful', Dennis the Menace, Permissive Childrearing and the Bad Boy Tradition", a thoughtful and provocative examination of children and popular culture:

" [T]he production, circulation and consumption of children's fiction is mediated on all levels by adults who mold both its form and content according to their own ideological construction of childhood as a social space removed from the adult world and "innocent" of its concerns." (http://web.mit.edu/cms/People/henry3/dennis.html) 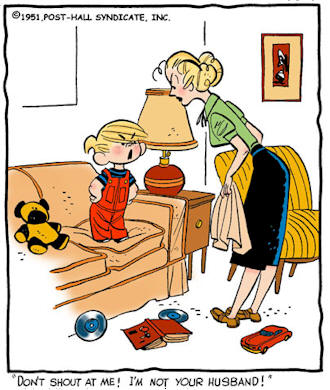 In other words, we adults-- the authors, illustrators, editors, and publishers of picture books--are the architects of the nearly parentless world inhabited by child protagonists in contemporary children's literature. Moreover, I believe we've arrived at this juncture as a result of the muddled approach to parenting that grew out of the excesses of the latter part of the 20th century. In fact, I suggest to you that there is a correlation between the diminished role of parents in children's literature and the cultural shift away from the pre 1950's authoritarian paradigm of childrearing to the more permissive model that prevails today. Permissive childrearing, in simplest terms, is a model which promotes parental catering to the "what, when, and how' of children's likes and dislikes: "[S]leep when sleepy---no regular nap or bedtimes, later, toilet training based on the child's readiness, toys' and rooms' order left up to the child, sex play accepted, angry, quarrelsome play accepted, hostility (kicks, hits, spits and so forth) against parents accepted; choice of friends, TV programs, comic books, left completely to the child, occasional absence from school accepted, attendance at Sunday school or church dependent on the child's choice.

" By contrast, "strict" parents were described as those "who fed their babies on a regular schedule, toilet trained them early, later insisted on clean hands, good table manners, 'please's' and 'thank you's', regular bedtimes, orderly rooms, who wouldn't allow sex play or quarrelsome, noisy play or the expression of anger against mothers and fathers, who had exercised careful supervision over TV programs, choice of friends and spare-time activities in general, who saw to it that school and church were attended without whim." (http://web.mit.edu/cms/People/henry3/dennis.html, id.; citing, Helen Puner, "Discipline: Strict or Permissive?" Parents, 1959, p.39)

Many of today's parents and nearly all of the grandparents were reared in a climate of permissive childrearing. We are a generation of adults who grew up with an expectation of being independent and free--rebelliously seeking liberation from our parents' staid social conventions. Therefore, it should come as little surprise that child protagonists in the world of modern picture books are generally portrayed as an autonomous, independent-minded (some might even add "self-absorbed") lot. These miniaturized adults experience a myriad of life adventures with little interaction and even less guidance from parents or other adult authority figures. Yet, real life children crave the safety and security of the family and community as much as they want freedom to explore the world around them. Mitzi Myers in her article, "Anecdotes from the Nursery" in Maria Edgeworth's Practical Education (1798) points out conscientious children's writers understand the struggle between these two competing interests:

"[M]ost authors who take seriously the responsibility of writing to and about children understand that childhood is about power, balancing the young person's need for autonomy and world-knowledge (Crusoe's and Gulliver's will and skills to survive) and the need for home, for a haven to return to; the conflicting yet interrelated juvenile rights to individual agency and communal protection that we still struggle to resolve." (Princeton University Library Chronicle LX:2, Winter 1999, pp.220-250)

When I incorporated a more balanced view of the parent-child relationship into the storyline of my book, "Sad Sam, Glad Sam", it threw my editor for a loop. Since this was my first children's book, she attempted to educate me about the writing guidelines for the genre; repeatedly stressing the importance of children being "empowered" to act "independent of parents" Still, in the end I refused to alter the relationship between the child protagonist and the mother. In my mind, when the main character "Sam" shuts down emotionally, it makes perfect sense for her mother to comfort her as well as seek a creative solution to the crisis. After all, in real life, young children do depend on their parents for emotional support and guidance.

On a recent trip to a well known bookstore chain, I made it a point to browse through the children's book section. I discovered most of the titles followed the formula my editor had suggested I use. If in time my approach to telling the "Sad Sam, Glad Sam" story proves to be wildly unpopular, instead of eating crow I'll insist on "dining on mince and slices of quince eaten with a runcible spoon."