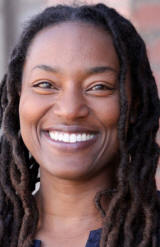 I’ve been reading what the publishing industry has dubbed “women’s fiction” since books by authors like Jodi Picoult, Emily Griffin, and Jennifer Weiner first hit the shelves. I read all kinds of novels, from crime to literary, but there’s something about coming “home” to female-centered narratives. Reading so-called women’s fiction has allowed me to peek into the lives of women who are overcoming abuse or addiction, or learning to love again. No matter the topic or theme, I’ve come to expect the heroine to be the focus of the novel and to triumph over whatever problem or catastrophe she’s facing.

What I’ve also come to expect, however, is that while the world in these novels might be made up women, it’s rare, very rare, that a prominent African American character plays a role in the story. Unless the book is set in the past, as with Katherine Stockett’s, The Help, or Julie Kibler’s Calling Me Home, prominent black female characters, or female characters of any color, are nowhere to be found. White author, white world.

But I get it. I do. If I want to read about black women’s lives I can pick up Terry McMillan’s latest or a novel by Victoria Christopher Murray, or any number of African American authors. But after all these years, I’m starting to long for a little more “race mixing” as it were.

Maybe it’s because I live in a multicultural city and have friends who are Latina, Jewish, gay, etc., or maybe it’s because when I’m teaching, many of my students are second and third generation Persian-American, Indian-American, Korean-American, and everything in between, I have to admit that I’m starting to crave more diverse characters. I guess I’m beginning to wonder when the books I read are going to start reflecting the multicultural aspects of the country. After all these years, and after all the sweeping changes in America’s demographics, for the most part, whenever I pick up women’s fiction, or contemporary fiction in general, it’s as if the world is made up of straight white people or straight black people and not much in between.

I’m not arguing that authors, of any race, need to write anything they don’t want to write, nor am I advocating that all books need a multi-ethnic cast; a writer’s vision comes from within and people should write whatever they want to. But for the sake of argument, I also think it’s odd that I can read a novel set in San Francisco or New York (as I’ve done recently) and every character is the same race, orientation and class.

I’m going to keep reading women’s fiction—and writing it—but I am waiting to see more diversity. Not always, but sometimes. Think of television shows like Scandal and Orange Is The New Black; the world is changing, and I see nothing wrong with showing its growing diversity in our books.