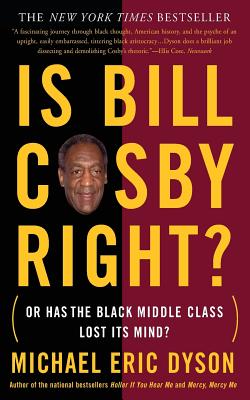 Bill Cosby’s 2004 remarks on African American progress resonated because, as author Michael Eric Dyson states, they "get to the heart of the struggle for African American identity." Dyson weighs in on this cultural brouhaha with his book, Is Bill Cosby Right? Or Has the Black Middle Class Lost Its Mind?

Dyson knows how to crank out books, authoring 11 critiques in the last 12 years on subjects including Tupac Shakur and Martin Luther King. In Is Bill Cosby Right? he errs in not presenting Cosby’s controversial remarks in their entirety; instead he doles them out in small portions at the beginning of five chapters that discuss racial identity, incarceration and educational achievement, name selection, parenting, and race relations.

Throughout the book Dyson’s reasoning is facile, pivoting from point to point with little apparent connection. His long and convoluted sentences make it hard to follow his logic, which one columnist aptly described as "corkscrew". These qualities contribute to wearisome reading; it is hard to be impressed with Dyson’s intellectual triumphs or to gloat at his deficiencies because readers’ energy is exhausted trying to follow his thinking.

Cosby’s charges were directed toward the lack of personal and moral responsibility shown by poor blacks. Thus the most uncomfortable, chickens-home-to-roost sections of Is Bill Cosby Right? examine Cosby’s alleged extramarital affairs and sexual advances (charges that are currently pending), and his parenting of his troubled daughter Erinn. Dyson is evenhanded in discussing these issues, rightfully underscoring that Cosby’s own house is not in perfect order.

Dyson is passionate about this subject, and his advocacy for the poor is admirable. But his writing style is infuriating, due to his fatuous use of words. For example: "Michael Jackson’s chilling reversal of pigment suggests the elasticity of the epidermis".  Sheesh! C’mon! Fortunately there are many sections where his commentary is substantive and well expressed.

The book’s most crucial (and flawed) argument reinforces the role of structural racism as a "root cause" in the ailments of African Americans. But in pursuing this line Dyson mixes apples and oranges. Cosby never denied that systemic problems hinder African American upward mobility. Dyson frequently refers to a 1969 interview where Cosby expounded on structural barriers to black advancement, undercutting his argument about Cosby’s lack of understanding and insensitivity. Thus the book’s reason for being is negated, amounting to Dyson trying to pound Cosby’s square peg remarks about self responsibility into the round holes of America’s systemic racism.

Dyson correctly points out that the current situation faced by African Americans is a "complex nexus of poor education, and limited life options leading to self-destructive choices made out of desperation." But he offers no suggestions for improvement, only repeating the importance of loving one another and being compassionate. These are necessary components, but only part of what is needed. Many readers will conclude that "Michael Eric Dyson Has Lost His Mind", for 288 pages of one-note, convolutions of Cosby’s remarks wears real thin, real quick.

Is Bill Cosby Right?: Or Has the Black Middle Class Lost Its Mind?Reviewed by Kam Williams

If you believe Cosby is a serial rapist, examine evidence which suggests the whole thing is a media hoax. You may change you mind.