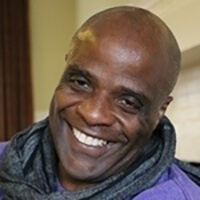 As a young boy, Dr. Neal Hall was taught to believe Washington never told a lie, Lincoln freed the slaves; that the American dream was a reality well within the reach of every American. All he needed to do to make this dream a reality, was self-motivation, discipline, hard work, and education. After years of academic rigors, Neal discovered - painfully - that despite all his hard work, enthusiasm and drive, America does not deliver equally.

Whether he works as an ophthalmologist or poet, his reality is clear-cut. In the eyes of "unspoken America", he is a Nigger For Life. Dr. Hall discovered that in "unspoken America", race is the one thing by which he is "first" judged; by which he is "first" measured, "first" against which his life and accomplishments are metered diminished value, dignity, and equality; all of which have everything to do with accessing choice, opportunity, power, and freedom. Now he can see - painfully - disguised from the eyes of the child he used to be, America’s continued state of slavery.

Dr. Neal Hall, M.D. received his undergraduate degree from Cornell University. After earning an M.D. from Michigan State University, he took his surgical subspecialty training in ophthalmology at Harvard University’s Medical School. He was in private practice for over 20 years.

Door of No Return