Paris, France-based American author Nita Wiggins is an acclaimed speaker, television commentator, and journalism instructor. In France since 2009, she has taught master’s level university students the journalism strategies she developed and used during her decades in front of the camera across the U.S. (from 1986 to 2009).

Black Women in Europe® named her to the group’s 2018 Power List for her prominence as a thought leader and educator.

Wiggins appears regularly on Paris’ France 24 television network to discuss workplace equality, women’s working lives, and media accuracy and representation, as well as U.S. life through the lens of politics, sports, and race. A sought-after voice, Wiggins has also been interviewed on Cameroon’s CRTV and Senegal’s TFM networks and in the Washington Post.

From the iconic Eiffel Tower during Global Sports Week 2021, Wiggins moderated an international panel, Sports as a Catalyst for Social Justice. Also in early 2021, she presented her paper, “Testimony on Economic Lynching in the United States,” at the Université de Tours conference titled The Black Family: Representation, Identity, and Diversity.

Wiggins shared in a 2001 regional Emmy for Special Events Coverage for KDFW-TV Fox 4 in Dallas, Texas, and received the national RTNDF Michele Clark Fellowship while a reporter at WSAZ-TV in West Virginia in 1989.

Currently, the Macon, Georgia, native devotes much of her time to helping people write their stories to bring out empathy in others. She is also co-developer of Good Cops Only At Game, a positive-incentive campaign designed to reduce the harm of police violence before it happens.

Wiggins earned a European master’s degree from ESJ Paris and a B.A. in communications from Augusta University in Georgia. From 1995 to 2008, she supported students at her undergraduate alma mater by awarding the Walter Wiggins-James Lott Communications Scholarship, which is named for her grandfathers. She is an NABJ member and mentor.

Her Civil Rights Baby memoir is being adapted to the screen, and an illustrated book and audiobook are in development. 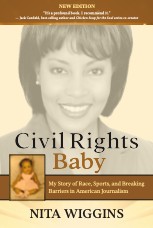