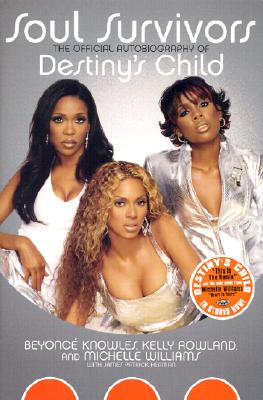 Soul Survivors: The Official Autobiography of Destiny’s Child
by Beyonce

Hardcover Description:
It must be a part of human nature to love drama. We never would have sold as many records — and we never would have been this popular — if our member changes did not happen. Up until that point, we were squeaky-clean nice girls who couldn’t get on the cover of any magazines. —Beyonc KnowlesThey’re beautiful, they’re talented, they’re bootylicious . . .From first kisses and broken hearts to pillow fights and legal battles to losing friends and finding strength in God, Beyonc Knowles, Kelly Rowland, and Michelle Williams share it all. Their example of survival has made Destiny’s Child one of the most beloved, bestselling female groups ever. Here for the first time, the three share the struggles that have made them stronger, from Beyonc ’s battles with weight loss and shyness, Kelly’s coming to terms with growing up without a dad, and Michelle’s triumph over grade-school bullies. They’ve grown up under the media microscope, and have had to deal with lineup changes and media rumors. Now they set the record straight. The demands and drama, the schedules and scrutiny — from the tour bus to the dressing rooms to backstage at awards shows, Beyonc , Kelly, and Michelle talk about what it takes to be successful. Whether it’s changing outfits in the rain, changing their hair color, or changing a name, they’ve done it. Don’t be mistaken, they’re not a prefab group of young girls — they’re smart, independent women with a lot of soul. When these ladies had only minutes of studio time to work with Wyclef Jean to remix one of their songs, they didn’t stress, they just started singing faster — and the result was a unique sound that put them on the map. Everyone has caught on to the Destiny’s Child groove — Whitney Houston, Bono, and Michael Jackson have all given them props, and the King of Pop himself serenaded them with a rendition of “Bootylicious.”Beyonc , Kelly, and Michelle take you behind the scenes of a video rehearsal at which Aaliyah rewound their practice music, to the set of Austin Powers 3, where a starstruck Beyonc felt anything but foxy before auditioning for the part of Foxxy Cleopatra, and backstage at the Grammys, where a last-minute costume change fiasco nearly kept Michelle from going onstage. With total honesty, these soul survivors not only dish the details of their past, but share their hopes, plans, and dreams for the future.

More books like Soul Survivors: The Official Autobiography of Destiny’s Child may be found by selecting the categories below: