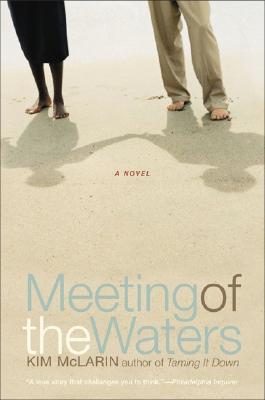 Meeting of the Waters: A Novel
by Kim McLarin

Book Description:
Porter Stockman, a determined white reporter, is covering the riots in the streets of South Central Los Angeles for the Philadelphia Record on the day that four Los Angeles police officers are acquitted of assaulting Rodney King. When Lenora Page, a black woman, risks her own safety to come to his aid and then disappears into the chaos, Porter fears he’ll never see her again. But weeks later their paths intersect once more when Lenora — a prominent reporter for the Baltimore Sun — accepts a job offer from his newspaper.During the course of the next year, Porter fights to win the trust and love of the suspicious and deeply conflicted Lenora. As they become a couple, they are forced to reexamine their assumptions about race . . . as well as their own insecurities, assumptions, and deeply hidden — but nevertheless powerful — fears about their union.Probing divided allegiances, split loyalties, and the pain of confronting one’s own prejudice, this poignant novel presents an impassioned and bittersweet look at interracial love in America today.

More books like Meeting of the Waters: A Novel may be found by selecting the categories below:

Tell us what do you think about Meeting of the Waters: A Novel.