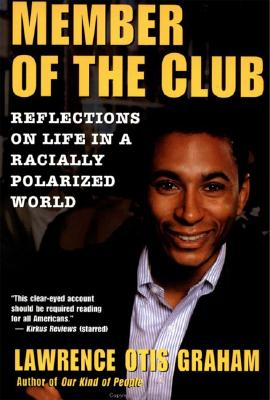 A Member of the Club: Reflections on Life in a Racially Polarized World
by Lawrence Otis Graham

Book Description:
Informed and driven by his experience as an upper-middle-class African American who lives and works in a predominately white environment, provocative author Lawrence Otis Graham offers a unique perspective on the subject of race. An uncompromising work that will challenge the mindset of every reader, Member of the Club is a searching book of essays ranging from examining life as a black Princetonian and corporate lawyer to exploring life as a black busboy at an all white country-club. From New York magazine cover stories Invisible Man and Harlem on My Mind to such new essays as "I Never Dated a White Girl" and "My Dinner with Mister Charlie: A Black Man’s Undercover Guide to Dining with Dignity at Ten Top New York Restaurants," Graham challenges racial prejudice among White Americans while demanding greater accountability and self-determination from his peers in black America. "In Member of the Club. [Graham writes of] heartbreaking ironies and contradictions, indignities and betrayals in the life of an upper-class black man." —Philadelphia Inquirer "Lawrence Graham Surely knows about the pressures of being beholden to two very different groups." —Los Angeles Times Lawrence Otis Graham is a popular commentator on race and ethnicity. The author of ten other books, his work has appeared in New York magazine, the New York Times and The Best American Essays.

More books like A Member of the Club: Reflections on Life in a Racially Polarized World may be found by selecting the categories below: