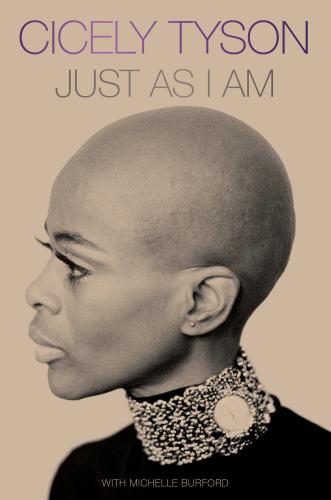 Just As I Am
by Cicely Tyson

The stunning life-story of Academy, Tony, and three-time Emmy Award winning actress and trailblazer, Cicely Tyson, that details her incredible six-decade career on and off screen.

At 94, Cicely Tyson is a dynamic and legendary actress. A Harlem native, she began her career as a fashion model, gracing the covers of Ebony and Jet. She transitioned to acting in 1951 and is still featured in coveted roles depicting strong, Black women outside of caricature or stereotypes. She played Viola Davis’s mother in How to Get Away with Murder, Coretta Scott King in King, Jane Pittman in The Autobiography of Miss Jane Pittman, and Mother Watts in Trip to Bountiful.

What is perhaps most incredible has been her ability to appeal to viewers across race and generations by embodying characters that are fresh and current. From classics such as Roots and Sounder to contemporary programming like House of Cards and Saturday Night Live, of which she was the first Black female host, Ms. Tyson is iconic, timeless, and highly-respected.

Now, Cicely Tyson travels from stage to page to bring the world an unprecedented peek into her closely guarded personal life and the grounding forces of family and faith that have informed her life. Ever humble, Ms. Tyson says, “The greatest gratification has come in refining my craft, not in gazing upon its merits.”

Just As I Am is an autobiography from the heart. In three sections—Planted, Rooted, and Bountiful—Ms. Tyson delves into revelatory life lessons from each major role, lessons that are unexpected, profound, and that have helped her navigate per personal and public lives in tandem. From the years spent at her mother’s elbow and in the grounding, nurturing pews of her church family to delving into her ancestry with the help of genealogy experts, Ms. Tyson’s spirit of curiosity rings true with poetic authenticity.

Just As I Am is Cicely Tyson’s personal testimony of how nine decades of experiences—some magnificent, others sorrowful, some on screen, many away from it—that have given birth to the woman she is still becoming.