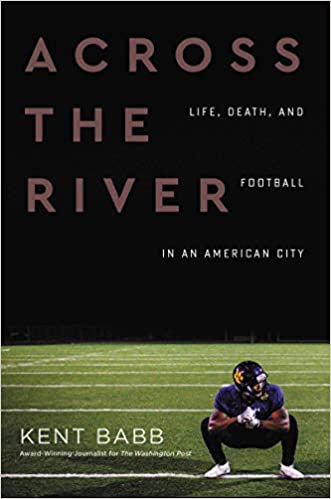 Across the River: Life, Death, and Football in an American City
by Kent Babb

On the west bank of the Mississippi, across from the tourist-heavy French Quarter, lies the New Orleans neighborhood of Algiers. Short on hope and big dreams, its mostly poor and marginalized residents find joy on Friday nights in fall, when the Cougars of Edna Karr High School take the field. For three years, this team of scrappy, talented athletes have brought glory to Edna Karr and Algiers, winning three straight consecutive state championships in Louisiana’s ultra-competitive Class 4A division.

While planning for a fourth title, thirty-three-year-old head football coach Brice Brown is focused on something much more important: keeping the 96 teenagers on his team alive. An epidemic of gun violence plagues New Orleans and its surrounding communities and has claimed too many innocent lives, including Coach Brown’s former star quarterback, Tollette "Tonka" George, shot at a local gas station. Determined to protect his boys, Coach Brown fills their days with workouts, team activities, and grueling marathon practice sessions. At night, he patrols the city in his rusted truck, iPhone in hand, dialing each of his players to make sure they made it home alive.

Award-winning sports journalist Kent Babb told Coach Brown’s story in the pages of the Washington Post. Now, he builds on his early reporting to offer a rich and deep portrait of this man, his players, and Algiers itself, where neighbors try to make the best of a terrible situation. Featuring eight pages of full-color photos, Across the River is an indelible true story of violence and pain, dedication and love, and the fight for life and a better future.

Books similiar to Across the River: Life, Death, and Football in an American City may be found in the categories below: