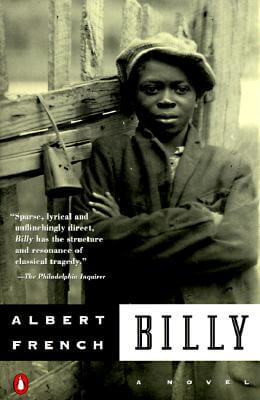 Book Description:
Albert French lights up the monstrous face of American racism in this harrowing tale of ten-year-old Billy Lee Turner, who is convicted of and executed for murdering a white girl in Banes County, Mississippi in 1937. Billy is about the deaths of two children, one girl, one boy, the girl’s death an accident, the boy’s a murder perpetrated by the state. Though the events Billy records occur during the 1930s in a small Mississippi town, the range of characters, emotions, and social forces, and the inexorable march to doom of a ten-year-old boy and the society that dooms him, catapult the story far beyond a specific time and location. Narrated by an anonymous observer in the rich accents of the region, constructed in a series of powerfully lean vignettes, Billy imparts an intensity that is nearly unbearable. It is a tour de force of dramatic compression. Albert French evokes with cinematic vividness the picking fields and town streets; the heat, the dust, the unrelenting sun, the poverty of 1930s Mississippi. High-spirited Billy; his mysterious and passionate mother, Cinder; his friend, Gumpy; and other characters black and white are realized with depth and authority. Told in classic, unrelieved terms yet with remarkable compassion and restraint, their story is an unsentimental and ultimately heart-rending vision of racial injustice. Billy is, quite simply, one of the most powerfully affecting novels to come along in years.

More books like Billy may be found by selecting the categories below: