Straight, No Chaser: How I Became a Grown-Up Black Woman by Jill Nelson 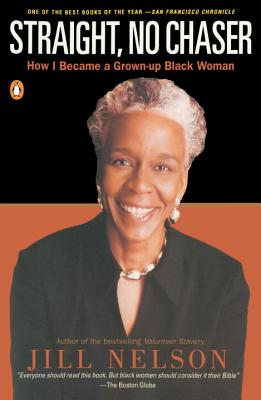 Straight, No Chaser: How I Became a Grown-Up Black Woman
by Jill Nelson

Book Description:
The face of journalism was forever changed after Jill Nelson came along. Volunteer Slavery, the memoir and explosive expose of her experiences in the white, male-dominated world of The Washington Post, served as a wake-up call to all Americans and placed Nelson at the forefront of the African American political arena.Now, the bestselling author is back with Straight, No Chaser, a call to arms written in an effort to "look at the sum of Ablack women’s? lives beyond the how-to-snag-a-man, am-I-pretty-enough and how’s-my-hair concerns that dominate Atheir? daily existence." Nelson encourages black women?especially young girls?to develop a positive identity in the face of adversity and to look critically at their role models, many of whom she believes send mixed messages to the African American community. From Barbie to bra burning, Mike Tyson to the Million Man March, Nelson takes a personal and thoughtful approach to the empowerment of the black female.

More books like Straight, No Chaser: How I Became a Grown-Up Black Woman may be found by selecting the categories below: