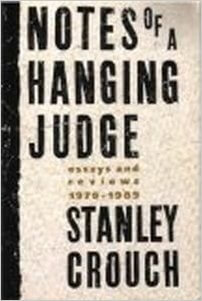 Book Description:
Stanley Crouch identifies the civil rights movement of the last four decades as the defining feature of contemporary American society. In Notes of a Hanging Judge, he explores it from all sides—from its epochal triumphs and the forces that have nearly destroyed it, through its great artistic and political success stories, to the crime culture it has been powerless to prevent or control—and traces its complex and ambivalent interactions with the feminist and gay dissent that followed its example.
Balancing the passionate involvement of an insider with a reporter’s open-minded rigor, and using his virtuosic prose style, Crouch offers uniquely insightful accounts of familiar public issues—black middle-class life, the Bernhard Goetz case, black homosexuals, the career of Louis Farrakhan—that throw fresh light on the position of Afro-Americans in the contemporary world. Even more revealing are Crouch’s accounts of his travels, focusing on his perceptions as a black man, that put places as diverse as Atlanta and Africa, or Mississippi and Italy, in unique new perspectives. Perhaps most powerful of all are Crouch’s profiles of black leaders ranging from Maynard, to Michael, to Jesse Jackson. Crouch’s stern evaluations have been controversial, especially his vision of the Civil Rights Movement as a noble cause "gone loco," mired in self-defeating ethnic nationalism and condescending self-regard, and conspicuously lacking in the spiritual majesty that ensured its great political victories. His discussions of artistic figures, including extended critiques of Toni Morrison and Spike Lee, have also incited much debate.
Taken together, these essays represent a major reinterpretation of black, and therefore American, culture in our time.

More books like Notes Of A Hanging Judge: Essays And Reviews, 1979-1989 may be found by selecting the categories below: