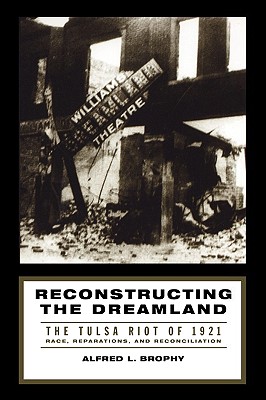 Reconstructing the Dreamland: The Tulsa Riot of 1921: Race, Reparations, and Reconciliation
by Alfred L. Brophy

Paperback Description:
The 1921 Tulsa Race Riot was the country’s bloodiest civil disturbance of the century. Thirty city blocks were burned to the ground, perhaps 150 died, and the prosperous black community of Greenwood, Oklahoma, was turned to rubble. Brophy draws on his own extensive research into contemporary accounts and court documents to chronicle this devastating riot, showing how and why the rule of law quickly eroded. Brophy shines his lights on mob violence and racism run amok, both on the night of the riot and the following morning. Equally important, he shows how the city government and police not only permitted looting, shootings, and the burning of Greenwood, but actively participated in it by deputizing white citizens haphazardly, giving out guns and badges, or sending men to arm themselves. Likewise, the National Guard acted unconstitutionally, arresting every black resident they found, leaving property vulnerable to the white mob. Brophy’s stark narrative concludes with a discussion of reparations for victims of the riot through lawsuits and legislative action. That case has implications for other reparations movements, including reparations for slavery.
Recovers a largely forgotten history of black activism in one of the grimmest periods of race relations…. Linking history with advocacy, Brophy also offers a reasoned defense of reparations for the riot’s victims.—Washington Post Book World

Books similiar to Reconstructing the Dreamland: The Tulsa Riot of 1921: Race, Reparations, and Reconciliation may be found in the categories below: