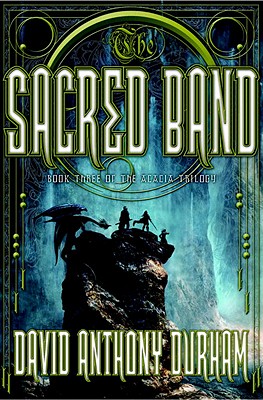 The Sacred Band: Book Three of the Acacia Trilogy
by David Anthony Durham

Hardcover Description:
With the first two books in the Acacia Trilogy, Acacia and The Other Lands, David Anthony Durham has created a vast and engrossing canvas of a world in turmoil, where the surviving children of a royal dynasty are on a quest to realize their fates—and perhaps right ancient wrongs once and for all. As The Sacred Band begins, one of them, Queen Corinn, bestrides the world as a result of her mastery of spells found in the ancient Book of Elenet. Her younger brother, Dariel, has been sent on a perilous mis sion to the Other Lands, while her sister, Mena, travels to the far north to confront an invasion of the feared race of the Auldek. Their separate trajectories will converge in a series of world-shaping, earth-shattering battles, all ren dered with vividly imagined detail and in heroic scale.

David Anthony Durham concludes his tale of kingdoms in collision in an exciting fashion. His fictional world is at once realistic and fantastic, informed with an eloquent and dis tinctively Shakespearean sensibility.