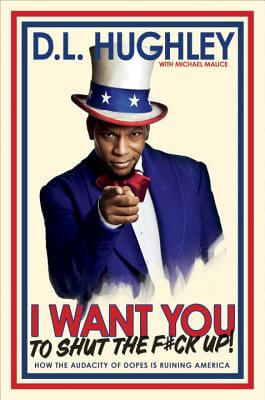 I Want You To Shut The F#Ck Up: How The Audacity Of Dopes Is Ruining America
by D.L. Hughley and Michael Malice

Read Our Review of I Want You To Shut The F#Ck Up: How The Audacity Of Dopes Is Ruining America

Hardcover Description:
“Let us begin by committing ourselves to the truth to see it like it is, and tell it like it is.” —Richard Nixon

“I believe America is the solution to the world’s problems.” —Rush Limbaugh

The American dream is in dire need of a wake-up call. A f*cked up society is like an addict: if you are in denial, then things are going to keep getting worse until you hit bottom. According to D. L. Hughley, that’s the direction in which America is headed.

In I Want You to Shut the F*ck Up, D.L. explains how we’ve become a nation of fat sissies playing Chicken Little, but in reverse: The sky is falling, but we’re supposed to act like everything’s fine. D.L. just points out the sobering facts: there is no standard of living by which we are the best. In terms of life expectancy, we’re 36th—tied with Cuba; in terms of literacy, we’re 20th—behind Kazakhstan. We sit here laughing at Borat, but the Kazakhs are sitting in their country reading.

Things are bad now and they’re only going to get worse. Unless, of course, you sit down, shut the f*ck up, and listen to what D. L. Hughley has to say. I Want You to Shut the F*ck Up is a slap to the political senses, a much needed ass-kicking of the American sense of entitlement. In these pages, D. L. Hughley calls it like he sees it, offering his hilarious yet insightful thoughts on:

- Our supposedly post-racial society
- The similarities between America the superpower and the drunk idiot at the bar
- Why Bill Clinton is more a product of a black upbringing than Barack Obama
- That apologizing is not the answer to controversy, especially when you meant what you said
- Why civil rights leaders are largely to blame for black people not being represented on television
- Why getting your ghetto pass revoked should be seen as a good thing, not something to be ashamed of
- And how hard it is to be married to a black woman