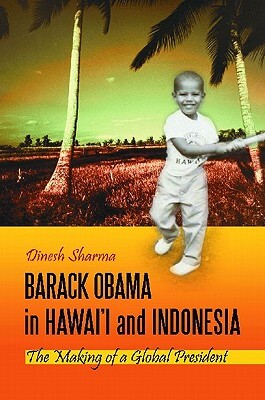 Barack Obama In Hawai’i And Indonesia: The Making Of A Global President
by Dinesh Sharma

Read Our Review of Barack Obama In Hawai’i And Indonesia: The Making Of A Global President

Hardcover Description:
The first 18 years of President Obama’s life, from his birth in 1961 to his departure for college in 1979, were spent in Hawai i and Indonesia. These years fundamentally shaped the traits for which the adult Obama is noted—his protean identity, his nuanced appreciation of multiple views of the same object, his cosmopolitan breadth of view, and his self-rooted "outpost" patriotism. Barack Obama in Hawai i and Indonesia: The Making of a Global President is the first study to examine, in fascinating detail, how his early years impacted this unique leader.Existing biographies of President Obama are primarily political treatments. Here, cross-cultural psychologist and marketing consultant Dinesh Sharma explores the connections between Obama’s early upbringing and his adult views of civil society, secular Islam, and globalization. The book draws on the author’s on-the-ground research and extensive first-hand interviews in Jakarta; Honolulu; New York; Washington, DC; and Chicago to evaluate the multicultural inputs to Obama’s character and the ways in which they prepared him to meet the challenges of world leadership in the 21st century.

More books like Barack Obama In Hawai’i And Indonesia: The Making Of A Global President may be found by selecting the categories below: