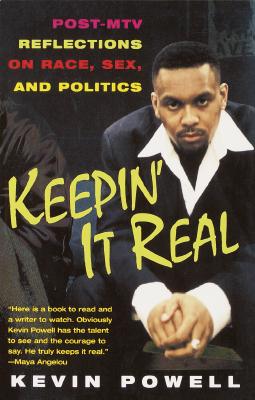 Keepin’ It Real: Post-MTV Reflections on Race, Sex, and Politics
by Kevin Powell

Paperback Description:
In Keepin’ It Real, writer, poet, and cultural critic Kevin Powell puts both himself and society under a microscope and creates a searingly honest collection that is at once powerful and disturbing. Within this rich weave of musings, confession, and sometimes painful introspection, he confronts such issues as racism, black self-hatred, gender violence in the ’90s, and his own anguished revelations about sex, love, and misogyny. He also explores the meaning and myths of the Million Man March and the influential and threatening presence of rap music. Like that musical movement, Kevin Powell samples the sights and sounds and scenarios of American life, then reshapes them into a provocative soundtrack for our times.

More books like Keepin’ It Real: Post-MTV Reflections on Race, Sex, and Politics may be found by selecting the categories below: