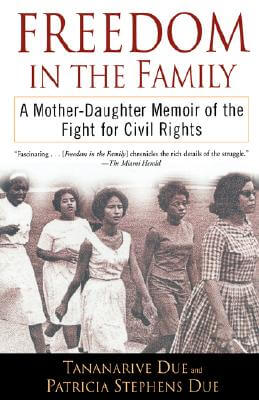 Freedom in the Family: A Mother-Daughter Memoir of the Fight for Civil Rights
by Tananarive Due

Patricia Stephens Due fought for justice during the height of the Civil Rights era. Her daughter, Tananarive, grew up deeply enmeshed in the values of a family committed to making right whatever they saw as wrong. Together, in alternating chapters, they have written a paean to the movement—its hardships, its nameless foot soldiers, and its achievements—and an incisive examination of the future of justice in this country. Their mother-daughter journey spanning two generations of struggles is an unforgettable story.

Patricia Stephens Due fought for justice during the height of the Civil Rights era, surrendering her very freedom to ensure that the rights of others might someday be protected. Her daughter, Tananarive, grew up deeply enmeshed in the values of a family committed to making right whatever they saw as wrong. Together, they have written a paean to the movement’its struggles, its nameless foot-soldiers, and its achievements’and an incisive examination of the future of justice in this country. Their mother-daughter journey spanning the struggles of two generations is an unforgettable story. Patricia Stephens Due was a civil rights activist with CORE while attending Florida A&M University. In 1960, based on her nonviolent stand during a landmark jail-in, she received the prestigious Gandhi Award. She is married to a civil rights lawyer, has three daughters, and continues to work for change in America. Over the years, she has conducted civil rights workshops and re-enactments for colleges, public schools, civic groups, and churches. She lives in Miami, Florida, with her husband, John Due. Photo: Troy Johnson

In 1960, when she was a student at Florida A&M University, Patricia and her sister Priscilla were part of the movement’s landmark ’jail-in,’ the first time during the student sit-in movement when protestors served their time rather than paying a fine. She and her sister, and three FAMU students, spent forty-nine days behind bars rather than pay for the ’crime’ of sitting at a Woolworth lunch counter. Thus began a lifelong commitment to human rights. Patricia and her husband, civil rights lawyer John Due, worked tirelessly with many of the movement’s greatest figures throughout the sixties to bring about change, particularly in the Deep Southern state of Florida.

Freedom in the Family chronicles these years with fascinating, raw power. Featuring interviews with civil rights leaders like Black Panther Stokely Carmichael (later known as Kwame Ture) and ordinary citizens whose heroism has been largely unknown, this is a sweeping, multivoicedaccount of the battle for civil rights in America. It also reveals those leaders’ potentially controversial feelings about the current state of our nation, a country where police brutality and crippling disparities for blacks and whites in health care, education, employment, and criminal justice still exist today.

A mother writes so that the civil liberties she struggled for are not eroded, so that others will take up the mantle and continue to fight against injustice and discrimination. Her daughter, as part of the integration generation, writes to say thank you, to show the previous generation how very much they’ve done and how much better off she is for their effort’despite all the work that remains. Their combined message is remarkable, moving, and important. It makes for riveting reading.

Books similiar to Freedom in the Family: A Mother-Daughter Memoir of the Fight for Civil Rights may be found in the categories below: