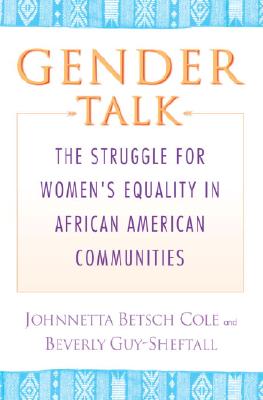 Book Description:Why has the African American community remained silent about gender even as race has moved to the forefront of our nation’s consciousness? In this important new book, two of the nation’s leading African American intellectuals offer a resounding and far-reaching answer to a question that has been ignored for far too long. Hard-hitting and brilliant in its analysis of culture and sexual politics, "Gender Talk asserts boldly that gender matters are critical to the Black community in the twenty-first century.
In the Black community, rape, violence against women, and sexual harassment are as much the legacy of slavery as is racism. Johnnetta Betsch Cole and Beverly Guy-Sheftall argue powerfully that the only way to defeat this legacy is to focus on the intersection of race and gender.
"Gender Talk examines why the "race problem" has become so male-centered and how this has opened a deep divide between Black women and men. The authors turn to their own lives, offering intimate accounts of their experiences as daughters, wives, and leaders. They examine pivotal moments in African American history when race and gender issues collided with explosive results—from the struggle for women’s suffrage in the nineteenth century to women’s attempts to gain a voice in the Black Baptist movement and on into the 1960s, when the Civil Rights movement and the upsurge of Black Power transformed the Black community while sidelining women.
Along the way, they present the testimonies of a large and influential group of Black women and men, including bell hooks, Faye Wattleton, Byllye Avery, Cornell West, Robin DG Kelley, Michael Eric Dyson, Marcia Gillispie, and Dorothy Height.
Provdingsearching analysis into the present, Cole and Guy-Sheftall uncover the cultural assumptions and attitudes in hip-hop and rap, in the O.J. Simpson and Mike Tyson trials, in the Million Men and Million Women Marches, and in the battle over Clarence Thomas’s appointment to the Supreme Court. Fearless and eye-opening, "Gender Talk is required reading for anyone concerned with the future of African American women—and men.

More books like Gender Talk: The Struggle for Women’s Equality in African American Communities may be found by selecting the categories below: