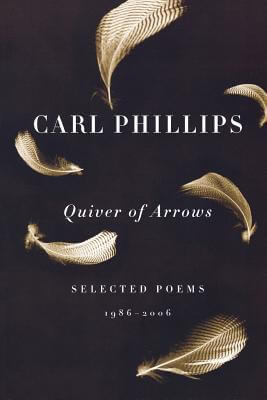 Book Description:
Quiver of Arrows is a generous gathering from Carl Phillips’s work that showcases the twenty-year evolution of one of America’s most distinctive—and one of poetry’s most essential—contemporary voices. Hailed from the beginning of his career for a poetry provocative in its candor, uncompromising in its inquiry, and at once rigorous and innovative in its attention to craft, Phillips has in the course of eight critically acclaimed collections generated a sustained meditation on the restless and ever-shifting myth of human identity. Desire and loss, mastery and subjugation, belief and doubt, sex, animal instinct, human reason: these are among the lenses through which Phillips examines what it means to be that most bewildering, irresolvable conundrum, a human being in the world.
Phillips’s sensibility as he questions morality, psychology, and our notions of responsibility is as startlingly original as the poems themselves, whose exacting standards for the line’s flexibility and whose argument for a versatile, more muscular syntax bring to American poetry "something not unlike a new musical scale" (The Miami Herald). Quiver of Arrows is the record of a powerful vision that, in its illumination of the human condition, has established itself as a necessary step toward our understanding of who we are in the twenty-first century.

More books like Quiver Of Arrows: Selected Poems, 1986-2006 may be found by selecting the categories below: