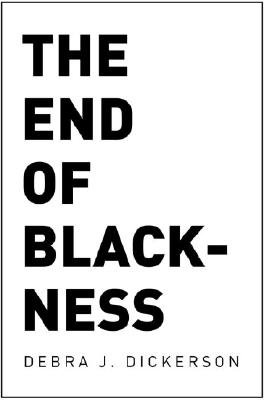 The End of Blackness
by Debra J. Dickerson

Book Description:
“This book will prove and promote the idea that the concept of blackness,’ as it has come to be understood, is rapidly losing its ability to describe, let alone predict or manipulate, the political and social behavior of African Americans.” Such is the explosive enterprise of what is sure to be one of the most
controversial books of recent times.

How has the notion of “blackness” bamboozled African Americans into an unhealthy obsession with white America? What are the deleterious consequences of this? How has “blackness” diminished the sovereignty of African Americans as rational and moral beings? How has white America exploited the concept to sublimate its rage toward and contempt for black America? Is American racism an intractable malaise, and who gets to decide when the past is over?

In this unstinting, keen, and brutally funny manifesto, Debra Dickerson critiques “race” as a bankrupt scientific and social construct, exposing the insidious, manipulative racial myths and prejudices still held by American blacks and whites. She examines much statistical rubbish that passes for sociological fact, the purposeful corruption of American history, and the resulting social ills and pathologies bedeviling both the black and white communities.

She bravely argues that, whether or not African Americans still have a moral claim against this country, they must now be fiercely self-reliant, ignoring the hackneyed presuppositions and expectations of whites and other blacks still stuck in tired and fruitless ways of thinking.

As the New York Times remarked about her highly acclaimed memoir, An American Story, “it is a startling thing to hear an American speak as frankly and un-self-servingly about race as Dickerson does.”

More books like The End of Blackness may be found by selecting the categories below: