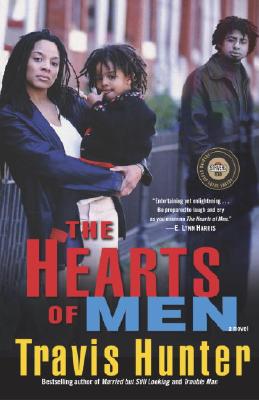 The Hearts of Men: A Novel (Strivers Row)
by Travis Hunter

Book Description:
Tall, dark, and handsome, Prodigy Banks was once a playboy. Now he’s a man any mother would be proud to call her son, and when he meets Nina, the mother of the young boy he mentors, it seems that life is going to get even better. But when his past threatens his newfound respectability, Prodigy has to act fast to protect his new relationship.

Bernard Charles is haunted by childhood memories of abandonment and poverty. His workaholic ways frustrate his wife, Diane, and leave her vulnerable to another man’s advances. After her betrayal, will Bernard move on or move out?

Winston “Poppa Doc” Fuller has a fix for what’s ailing the younger generation. Married for more than forty years to his beloved Ethel, Winston brings healing to everyone he touches. Yet despite his best efforts, he hasn’t been able to reach his own thirty-three-year-old son—a situation that soon requires urgent resolution, because as Poppa Doc tells his son: “I love you, but I’m not proud of you. Make me proud of you before I leave this earth.”

In his marvelous debut novel, Travis Hunter has crafted a tale that is funny, sexy, and touching—revealing what it truly means to have the heart of a man.

More books like The Hearts of Men: A Novel (Strivers Row) may be found by selecting the categories below:

Tell us what do you think about The Hearts of Men: A Novel (Strivers Row).