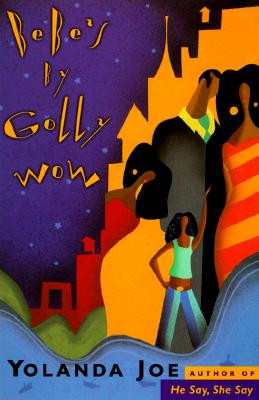 Bebe, a forty-something bank supervisor and recent college graduate, has finally found the reason to end the self-imposed man sabbatical she began in Yolanda Joe’s first novel, "He Say, She Say—a charming and sweet firefighter named Isaac Sizemore. A big, strapping "steak-colored" man who is as strong as he is sensitive, Isaac is the man of Bebe’s dreams. But he’s also a father dealing with the challenges of raising a thirteen-year-old daughter on his own. Much to Bebe’s surprise, Isaac’s whip-smart daughter, Dashay, turns out to be the "other woman" who threatens to keep them apart. Meanwhile Sandy, Bebe’s best friend, who is struggling in the workplace as she clashes with the new owners of the radio station, continues on her adventure in search of true love, refusing to give up. Set in Chicago and told in alternating voices, "Bebe’s By Golly Wow sparkles with Yolanda Joe’s deft storytelling, in-your-face dialogue, and marvelous insight as she paints a sensitive and funny tale of modern romance, family transitions, and heartfelt friendships.

More books like Bebe’s by Golly Wow! may be found by selecting the categories below: