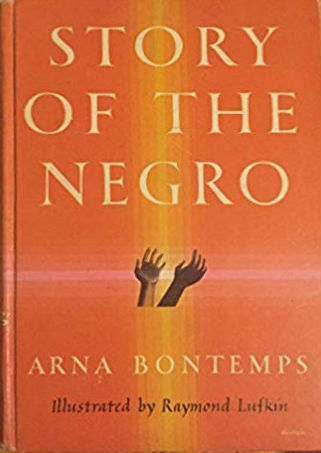 Story of the Negro
by Arna Bontemps

The first African-American authored book to receive a Newbery Honor.

The non-fiction book starts with a history dating back to 1700 BC, beginning with African civilizations such as the Ghana and Mandingo Empires. The horrors of the Atlantic slave trade are described, together with the causes and conditions of slavery in America, the Haitian Slave Revolt, and the Underground Railroad. Influential black leaders are examined, including Frederick Douglass, Harriet Tubman, and W. E. B. Du Bois. Bontemps said that the book,

“consists mainly of things I learned after I left school that I wish I had known much earlier.”

The book includes a theme poem, “The Negro Speaks of Rivers” by Langston Hughes.

The book is split into five different sections, The Ship Introduction, Men of the lakes How African civilizations worked, The Crossing The Columbian trade sent Africans to the New World under poor conditions. Slavery was outlawed in 1863, and people were allowed to move freely, often to New York, The bondage About the twentieth century and the struggle to win rights and Making a new world After the Civil rights act was approved, there was still plenty to do to make the world an equal place.