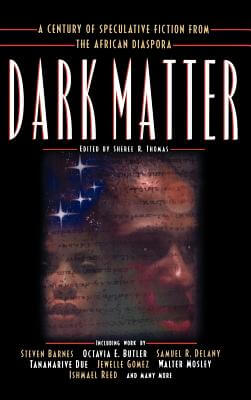 Dark Matter: A Century of Speculative Fiction from the African Diaspora
Edited by Sheree Renee Thomas

Read an Excerpt from Dark Matter: A Century of Speculative Fiction from the African Diaspora

Hardcover Description:
This volume introduces black science fiction, fantasy, and speculative fiction writers to the generations of readers who have not had the chance to explore the scope and diversity among African-American writers.

Speculative fiction, fantasy, and science fiction are assumed to be the genres of alternative thought; however, too often these realms of imagination reflect only the Occidental vision and culture. Now an important new anthology, the first of its kind, explodes such preconceptions with more than a century of fantastic fiction by preeminent and emerging authors of the African diaspora, including recipients of literature’s most prestigious awards.

This richly vibrant collection of stories and essays displays the brilliance of writers ranging from the early pioneers, such as Charles W. Chesnutt, W. E. B. Du Bois, and George S. Schuyler, to Samuel R. Delany and Octavia E. Butler — whose classic sf became the springboards for their fame — to such renowned figures of the African American literary tradition as playwright-critic Amiri Baraka and satirist Ishmael Reed. Dark Matter also highlights a wide spectrum of talents who have garnered both genre and mainstream acclaim, including Steven Barnes, Tananarive Due, Jewelle Gomez, Nalo Hopkinson, Walter Mosley, and Kalamu ya Salaam.

A few of the Dark Matter Contributors

Books similiar to Dark Matter: A Century of Speculative Fiction from the African Diaspora may be found in the categories below: