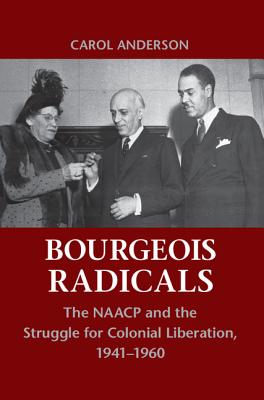 Bourgeois Radicals: The NAACP and the Struggle for Colonial Liberation, 1941-1960
by Carol Anderson

Book Description:
Bourgeois Radicals explores the NAACP’s key role in the liberation of Africans and Asians across the globe even as it fought Jim Crow on the home front during the long civil rights movement. In the eyes of the NAACP’s leaders, the way to create a stable international system, stave off communism in Africa and Asia, and prevent capitalist exploitation was to embed human rights, with its economic and cultural protections, in the transformation of colonies into nations. Indeed, the NAACP aided in the liberation struggles of multiple African and Asian countries within the limited ideological space of the Second Red Scare. However, its vision of a "third way" to democracy and nationhood for the hundreds of millions in Asia and Africa was only partially realized due to a toxic combination of the Cold War, Jim Crow, and die-hard imperialism. Bourgeois Radicals examines the toll that internationalism took on the organization and illuminates the linkages between the struggle for human rights and the fight for colonial independence.

More books like Bourgeois Radicals: The NAACP and the Struggle for Colonial Liberation, 1941-1960 may be found by selecting the categories below:

Tell us what do you think about Bourgeois Radicals: The NAACP and the Struggle for Colonial Liberation, 1941-1960.