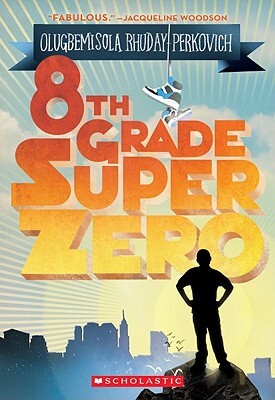 After the worst first day back *ever*, Reggie’s been nicknamed “Pukey” McKnight at his Brooklyn school. He wants to turn his image around, but he has other things on his mind as well: his father, who’s out of a job; his best friends, Joe C. (who’s a little too White) and Ruthie (who’s a little too intense); his ex-best friend Donovan, who’s now a jerk; and of course, the beautiful Mialonie. The elections for school president are coming up, but with his notorious nickname and “nothing” social status, Reggie wouldn’t stand a chance, if he even had the courage to run.

Then Reggie gets involved with a local homeless shelter. Inspired by the clients there—especially Charlie, a five-year-old kid who becomes his official “Little Buddy”— he begins to think about making a difference, both in the world and at school. Pukey for President? It can happen… if he starts believing.

More books like Eighth-Grade Superzero may be found by selecting the categories below: