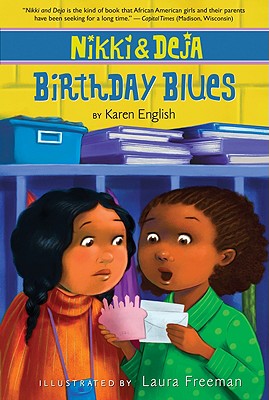 Paperback Description:
The second book about Nikki and Deja, two African American third-grade girls who are best friends.Deja’s birthday is coming up, and she’s been talking about it for weeks. But just before the big day, Auntie Dee gets called away on a business trip and Deja must stay with an elderly neighbor … who cooks turnips for dinner and doesn’t even have a color TV! Worse, the machinations of spoiled Antonia, Deja’s new nemesis, threaten to ruin Deja’s birthday party plans. Like the first book, this story captures with subtlety and humor all the small betrayals and triumphs of young girls’ relationships. Readers will get a wider view of the girls’ diverse urban neighborhood, and will recognize themselves and their classmates in the colorful, deftly drawn school scenes. A more serious theme is also introduced (with a light touch) in a subplot concerning Deja’s absent father.

More books like Nikki and Deja: Birthday Blues may be found by selecting the categories below: