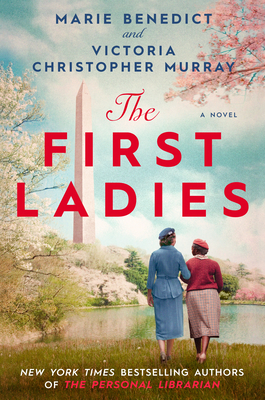 The First Ladies
by Marie Benedict and Victoria Christopher Murray

A novel about the extraordinary partnership between First Lady Eleanor Roosevelt and civil rights activist Mary McLeod Bethune—a forbidden friendship that changed the world, from the New York Times bestselling authors of The Personal Librarian.

The daughter of formerly enslaved parents, Mary McLeod Bethune refuses to back down as white supremacists attempt to thwart her work. She marches on as an activist and an educator, and as her reputation grows she becomes a celebrity, revered by titans of business and recognized by U.S. Presidents. Eleanor Roosevelt herself is awestruck and eager to make her acquaintance. Initially drawn together because of their shared belief in women’s rights and the power of education, Mary and Eleanor become fast friends confiding their secrets, hopes and dreams—and holding each other’s hands through personal and professional strife.

When Franklin Delano Roosevelt is elected president, the two women begin to collaborate more closely, particularly as Eleanor moves toward her own agenda separate from FDR, a consequence of the devastating discovery of her husband’s secret love affair. Eleanor becomes a controversial First Lady for her outspokenness, particularly on civil rights. And when she receives threats because of her strong ties to Mary, it only fuels the women’s desire to fight together for justice and equality.

This is the story of two different, yet equally formidable, passionate, and committed women, and the way in which their singular friendship helped form the foundation for the modern civil rights movement.