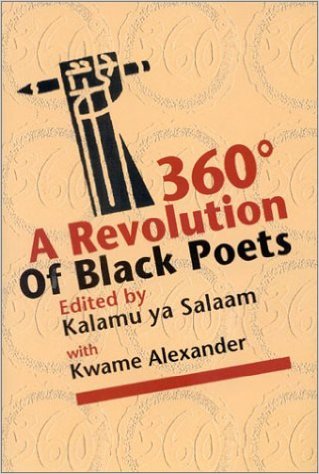 At poetry slams, in coffee houses and cafes, on spoken word CDs, and even featured in Hollywood movies, a new and exciting renaissance of Black poetry is emerging out of the oral tradition of African-American culture. 360°: A Revolution of Black Poets presents the cutting edge of this poetic firestorm sweeping across America.

Featuring five pages per poet, 360 presents forty established and emerging Black poets in an anthology of contemporary verse. Stylistically there is everything from rap-like performance verse to haiku, political rants to lyrical love songs, narrative tales to personal meditations. 360 is a treasure map of Black poetry.

360 is published in conjunction with a two-day series of poetry readings, workshops, and film screenings at the Baltimore Museum of Art (Sept. 11) and the University of Maryland-College Park (Sept. 12).

Edited by New Orleans writer/producer Kalamu ya Salaam with writer/publisher Kwame Alexander, 360 includes sharp-edged new work from Amiri Baraka, a historic founder of the sixties Black Arts Movement, complemented by a moving elegy for a friend with cancer from activist/poet Tony Medina, editor of an award-winning anthology on political prisoner Mumia Abu Jamal.

Grand divas Sonia Sanchez, author of Wounded in the House of a Friend and Does Your House Have Lions, and Mari Evans, author of the classic I Am a Black Woman, are displayed side by side with the youthful albeit sophisticated musings of Apollo Showtime winner Jessica Care Moore and Pulitzer prize nominee Ruth Forman.

The table of contents is a poetic who’s who. From Emmy-winning West Coast writer Wanda Coleman and legendary playwright/novelist/poet Ntozake Shange, to Abiodun Oyewole, a founding member of the Last Poets, and Mannafest, a London-based female duo, the range of Black poets is encyclopedic. 360 is one of the most eclectic poetry anthologies in decades.

Kalamu ya Salaam is a New Orleans-based poet, music critic, arts administrator, editor and publisher. He is the founder and leader of the Spoken Word/Jazz Ensemble, "The Word Band," and the author of numerous works of poetry and non-fiction, including the forthcoming history of the Black Arts Movement, "The Magic of JuJu."

Kwame Alexander is the founder and CEO of BlackWords, Inc, a book publishing and multi-media firm dedicated to providing publishing opportunities for the many talented literary voices of the Hip Hop Generation. He is the author of Just Us: poems and counterpoems and the executive producer of the 360 ; Festival.

Books similiar to 360° A Revolution of Black Poets may be found in the categories below: