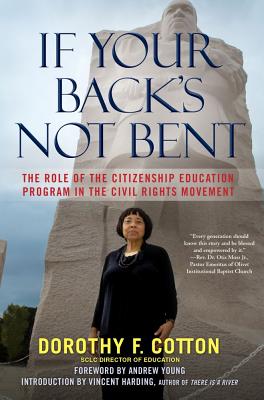 If Your Back’s Not Bent: The Role of the Citizenship Education Program in the Civil Rights Movement
by Dorothy F. Cotton

Hardcover Description:
The only female in Martin Luther King, Jr.’s inner circle of leadership, for the first time, offers her account of the Civil Rights Movement and what it means to us now.

“Nobody can ride your back if your back’s not bent,” Dr. Martin Luther King Jr. said at the end of a Citizenship Education Program (CEP), an adult grassroots training program directed by Dorothy Cotton. This program, called the best-kept secret of the twentieth century’s civil rights movement, was critical in preparing legions of disenfranchised people across the South to work with existing systems of local government to gain access to services and resources they were entitled to as citizens. They learned to demonstrate peacefully against injustice, even when they were met with violence and hatred. The CEP was born out of the work of the Tennessee Highlander Folk School and was fully developed and expanded by the Southern Christian Leadership Conference led by Dr. King until that fateful day in Memphis in April 1968. Cotton was checked into the Lorraine Motel at that time as well, but she’d left to do the work of the CEP before the assassin’s bullet was fired.

If Your Back’s Not Bent recounts the accomplishments and the drama of this training that was largely ignored by the media, which had focused its attention on marches and demonstrations. This book describes who participated and how they were transformed—men and women alike—from victims to active citizens, and how they transformed their communities and ultimately the country into a place of greater freedom and justice for all. Cotton, the only woman in Dr. King’s inner circle of leadership, for the first time offers her account of the movement, correcting the historical impression that “we only marched and sang.” She shows how the CEP was key to the movement’s success, and how the lessons of the program can serve our democracy now. People, and therefore systems, can indeed change “if your back’s not bent.”

More books like If Your Back’s Not Bent: The Role of the Citizenship Education Program in the Civil Rights Movement may be found by selecting the categories below: