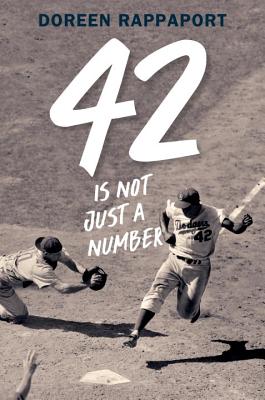 42 Is Not Just a Number: The Odyssey of Jackie Robinson, American Hero
by Doreen Rappaport

Hardcover Description:
An eye-opening look at the life and legacy of Jackie Robinson, the man who broke the color barrier in Major League Baseball and became an American hero.

Baseball, basketball, football — no matter the game, Jackie Robinson excelled. His talents would have easily landed another man a career in pro sports, but such opportunities were closed to athletes like Jackie for one reason: his skin was the wrong color. Settling for playing baseball in the Negro Leagues, Jackie chafed at the inability to prove himself where it mattered most: the major leagues. Then in 1946, Branch Rickey, manager of the Brooklyn Dodgers, recruited Jackie Robinson. Jackie faced cruel and sometimes violent hatred and discrimination, but he proved himself again and again, exhibiting courage, determination, restraint, and a phenomenal ability to play the game. In this compelling biography, award-winning author Doreen Rappaport chronicles the extraordinary life of Jackie Robinson and how his achievements won over — and changed — a segregated nation.

More books like 42 Is Not Just a Number: The Odyssey of Jackie Robinson, American Hero may be found by selecting the categories below: