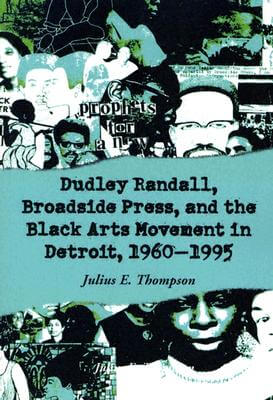 Book Description:
In 1965 Dudley F. Randall founded the Broadside Press, a company devoted to publishing, distributing and promoting the works of black poets and writers. In so doing, he became a major player in the civil rights movement. Hundreds of black writers were given an outlet for their work and for their calls for equality and black identity. Though Broadside was established on a minimal budget, Randall’s unique skills made the press successful. He was trained as a librarian and had spent decades studying and writing poetry; most importantly, Randall was totally committed to the advancement of black literature. The famous and relatively unknown sought out Broadside, including such writers as Gwendolyn Brooks, Margaret Walker, Mae Jackson, Lance Jeffers, Etheridge Knight, Sonia Sanchez, Nikki Giovanni, Audre Lorde and Sterling D. Plumpp. His story is one of battling to promote black identity and equality through literature, and thus lifting the cultural lives of all Americans.

More books like Dudley Randall, Broadside Press, And The Black Arts Movement In Detroit, 1960-1995 may be found by selecting the categories below:

Tell us what do you think about Dudley Randall, Broadside Press, And The Black Arts Movement In Detroit, 1960-1995.