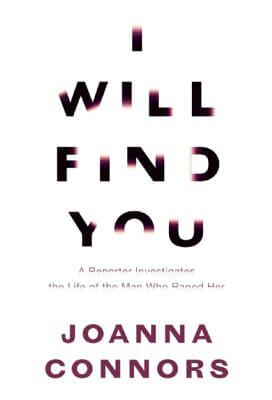 I Will Find You: A Reporter Investigates the Life of the Man Who Raped Her
by Joanna Conners

“This is it. My rape. I knew it was coming. Every woman knows. And now here it is. My turn.”

When Joanna Connors was thirty years old on assignment for the Cleveland Plain Dealer to review a play at a college theater, she was held at knife point and raped by a stranger who had grown up five miles away from her. Once her assailant was caught and sentenced, Joanna never spoke of the trauma again, until 21 years later when her daughter was about to go to college. She resolved then to tell her children about her own rape so they could learn and protect themselves, and she began to realize that the man who assaulted her was one of the formative people in her life.

Setting out to uncover the story of her attacker, Connors embarked on a journey to find out who he was, where he came from, who his friends were and what his life was like. What she discovers stretches beyond one violent man’s story and back into her own, interweaving a narrative about strength and survival with one about rape culture and violence in America.

I Will Find You is a brave, timely consideration of race, class, education and the families that shape who we become, by a reporter and a survivor.

More books like I Will Find You: A Reporter Investigates the Life of the Man Who Raped Her may be found by selecting the categories below: