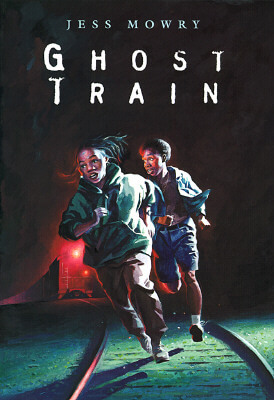 Hardcover Description:
"The sound of the train woke him … rhythmic panting putts like the breath of some huge jungle beast."

Oakland, California, is a tough place to grow up: kids pack guns at school; crackheads loiter in doorways; even the wrong-colored clothes can get you "a dirt nap." But for thirteen-year-old Remi, who has just arrived from Haiti, the first night brings something even more terrifying: a monstrous, out-of-control train lurches toward his bedroom window—and only Remi can see it.

With the help of his downstairs neighbor, the fast-talking, street-smart Niya, Remi is drawn ever deeper into the mystery of the ghostly night train. Their search leads them back to wartime Oakland, to a shipyard filled with African-American dockworkers and sailors, and, ultimately, to the scene of a murder. Can Remi and Niya find the murderer without becoming trapped in Oakland’s past? Or, have they entered a supernatural realm from which there is no escape?

"Remi could hear it gaiing on them. The shriek of its whistle rang in his ears. But there just ahead was the switch. Niya was now a few paces in front of him. Then she was passing the switch. Remi started to believe they would make it home! For all its power, its great pounding pistons, its roaring of fire and spewing of steam, the train could not catch them!

And then Niya fell."

More books like Ghost Train may be found by selecting the categories below: