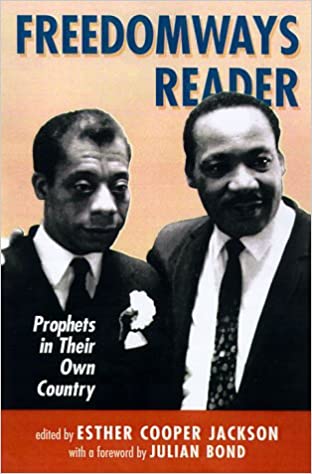 Freedomways Reader: Prophets In Their Own Time
Edited by Esther Cooper Jackson

From 1961 to 1985, a period of massive social change for African Americans, Freedomways Quarterly published the leaders and artists of the black freedom movement.

No other journal could boast such a long list of names from the civil rights movement: Freedomways was like no other journal. It was unique. Yet despite the well-known names, few Americans have heard of this national treasure. Why? Simply put, the United States was not ready for this journal in 1961. Today, many Americans cannot remember a United States where racial segregation was legal, but in 1961, many of the battles for integration were still to be won.

This book is subtitled Prophets in their Own Country because the editors and contributors to Freedomways were not honored at the journal’s inception. Eventually, however, much of their vision did come to pass. Until now, these documents, which show the depth and breadth of the struggle for democracy, had been lost to the public. The publication of the Freedomways Reader restores this lost treasury. It contains what amounts to an oral history of the liberation movements of the 1960s through the 1980s.

Through the reports of the Freedom Riders, the early articles against the Vietnam War and South African apartheid, the short stories and poems of Alice Walker, and the memoirs of black organizers in the Jim Crow south of the Thirties, one can walk in the footsteps of these pioneers.