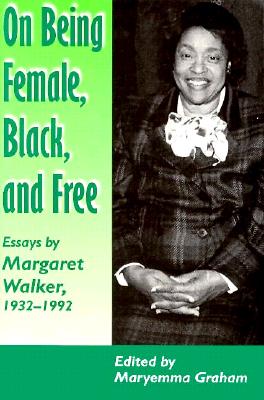 On Being Female Black Free: Margaret Walker 1932-1992
by Maryemma Graham

Book Description:
These highly personal essays, written over the course of six decades, reveal the woman as well as the artist, capturing the independent creative spirit of this literary icon. In accessible and stirring prose, Walker speaks directly about her own experiences - such as growing up in a deeply religious home, living in the Jim Crow South, marrying and raising a family, and becoming a civil rights activist. These essays also offer Walker’s critical perspectives on a wide range of topics, from the role of the black woman artist to the distinctiveness of African American cultural life and to the importance of education in the fight for political change. Maryemma Graham’s introduction provides a historical context for the essays, placing Walker’s work within the African American literary canon. Walker reflects on the numerous poets and writers she has known over the years, including Zora Neale Hurston, Eudora Welty, Carson McCullers, and Richard Wright. A work of broad general appeal, On Being Female, Black, and Free offers a powerful introduction to the work of an essential American literary figure.

More books like On Being Female Black Free: Margaret Walker 1932-1992 may be found by selecting the categories below: