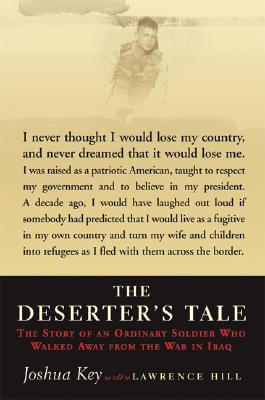 The Deserter’s Tale: The Story Of An Ordinary Soldier Who Walked Away From The War In Iraq
by Joshua Key

Hardcover Description:
In the first ever memoir from a young soldier who deserted from the war in Iraq, Joshua Key offers a vivid and damning indictment of what we are doing there and how the war itself is being waged. Key, a young husband and father from a conservative background, enlisted in the Army in 2002 to get training as a welder and lift his family out of poverty. A year later, Key was sent to Ramadi where he found himself participating in a war that was not the campaign against terrorists and evildoers he had expected. He saw Iraqi civilians beaten, shot, and killed for little or no provocation. Nearly ever other night, he participated in raids on homes that found only terrified families and no evidence of terrorist activity. On leave, Key knew he could not return so he took his family underground, finally seeking asylum in Canada. The Deserter’s Tale is the story of a patriotic family man who went to war believing unquestioningly in his government’s commitment to integrity and justice, and how what he saw in Iraq transformed him into someone who could no longer serve his country.

More books like The Deserter’s Tale: The Story Of An Ordinary Soldier Who Walked Away From The War In Iraq may be found by selecting the categories below: