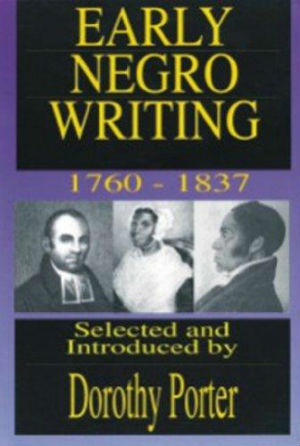 In Early Negro Writing, first published in 1971, Dorothy Porter presents a rare and indispensable collection of writings of literary, social, and historical importance. Most of the writings contained in this collection are no longer in print. In some cases, only one or two original copies are known to exist.

Early Negro Writing is rich with narratives, poems, essays, and public addresses by many of America’s early Black literary pioneers and champions of racial equality. Represented in this work are poems by Jupiter Hammon and Phillis Wheatley and a spiritual song by Richard Allen, founder of the African Methodist Episcopal church.

The essays in this collection document the fact that from the earliest days of this country, Black Americans have voiced their concerns on the subject of freedom, slavery, politics, morals, religion, education, emigration, and other issues. Confronted by an often hostile social environment Blacks learned quickly the value of mutual aid and fraternal organizations. Addresses by Masonic organizer and abolitionist Prince Hall and others highlight the importance of these early self-help efforts.