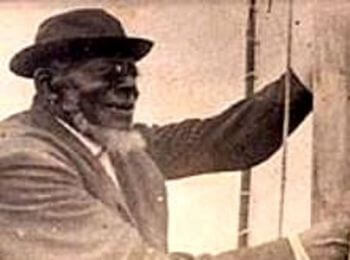 Jupiter Hammon (October 17, 1711 – 1806) was a poet who in 1761 became the first African-American writer to be published in the present-day United States. Born into slavery, Hammon was never emancipated. He is considered one of the founders of African-American literature.

Born in Lloyd Manor in Lloyd Harbor, NY (according to a Town of Huntington, NY historical marker) Hammon was held by four generations of the Lloyd family. Jupiter’s parents were both slaves held by the Lloyds. His mother and father were part of the first shipment of slaves to Lloyd’s estate in 1687. Unlike most slaves, his father, named Obadiah, had learned to read and write.

The Lloyds encouraged Jupiter to attend school, where he also learned to read and write. Jupiter attended school with the Lloyd children. As an adult, he worked for them as a domestic servant, clerk, farmhand, and artisan in the Lloyd family business.

His first published poem, "An Evening Thought. Salvation by Christ with Penitential Crienes: Composed by Jupiter Hammon, a Negro belonging to Mr. Lloyd of Queen’s Village, on Long Island", appeared as a broadside in 1761.

Considered a religious poet, Hammon also served as a preacher to the other enslaved members of the Lloyd estate. He was a prominent member of the African-American community, and in 1787 made a speech to the African Society of New York City titled “An Address to the Negroes in the State of New York.”

Jupiter Hammon was buried in an unmarked grave on the Lloyd estate. 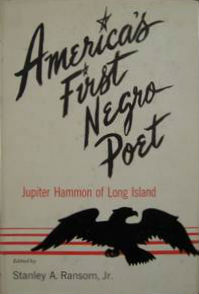