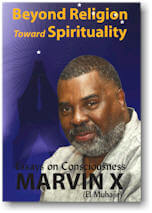 Beyond Religion Toward Spirituality
by Marvin X

Marvin X has done extraordinary mind and soul work in bringing our attention to the importance of spirituality, as opposed to religion, in our daily living. Someone maybe Kierkegaard or maybe it was George Fox who said that there was no such thing as "Christianity." There can only be Christians. It is not institutions but rather individuals who make the meaningful differences in our world. It is not Islam but Muslims. Not Buddhism but Buddhists. Marvin X has made a courageous difference. In this book he shares the wondrous vision of his spiritual explorations. His eloquent language and rhetoric are varied sophisticated but also earthy, sometimes both at once.

Highly informed he speaks to many societal levels and to both genders to the intellectual as well as to the man/woman on the street or the unfortunate in prison to the mind as well as the heart. His topics range from global politics and economics to those between men and women in their household. Common sense dominates his thought. He shuns political correctness for the truth of life. He is a Master Teacher in many fields of thought religion and psychology, sociology and anthropology, history and politics, literature and the humanities. He is a needed Counselor, for he knows himself, on the deepest of personal levels and he reveals that self to us, that we might be his beneficiaries.

All of which are represented in his Radical Spirituality a balm for those who anguish in these troubling times of disinformation. As a shaman himself, he calls too for a Radical Mythology to override the traditional mythologies of racial supremacy that foster war and injustice. If you want to reshape (clean up, raise) your consciousness, this is a book to savor, to read again, and again to pass onto a friend or lover.
—Rudolph Lewis, Editor, ChickenBones: A Journal