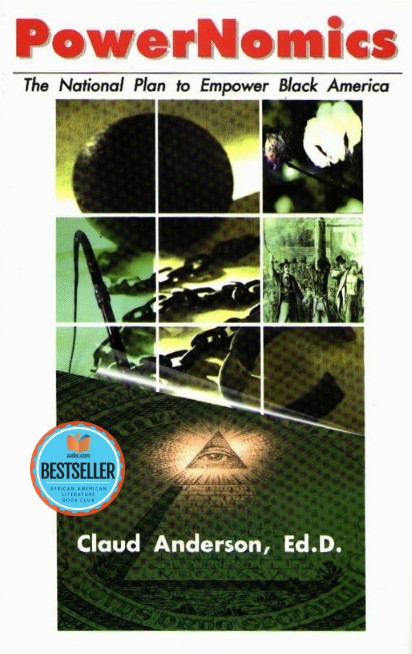 PowerNomics: The National Plan to Empower Black America is a five-year plan to make Black America a prosperous and empowered race that is self-sufficient and competitive as a group by the year 2005. In this book, Dr. Anderson obliterates the myths and illusions of black progress and brings together data and information from many different sources to construct a framework for solutions to the dilemma of Black America.

In PowerNomics: The National Plan, Dr. Anderson proposes new principles, strategies and concepts that show blacks a new way to see, think, and behave in race matters. The new mind set prepares blacks to take strategic steps to create a new reality for their race. It offers guidance to others who support blacks self-sufficiency. In this book, Dr. Anderson offers insightful analysis and action steps blacks can take to redesign core areas of life - Education, Economics, Politics and Religion - to better benefit their race. The action steps in each area require new empowerment tools that Dr. Anderson presents - a new group vision and a new culture of empowerment - tools designed to counter, if not break many of the racial monopolies in society. Vertical integration and Industrializing black communities are other major concepts and strategies that he presents in the book. He places a great deal of importance on building industries in black communities that are constructed upon group competitive advantages. A the same time he announced the release of PowerNomics: The National Plan, he also announced that he has established several models of the strategies he proposes in the book.

PowerNomics: The Plan, is infused with Dr. Anderson’s trademark creative thinking and answers questions such as: - Why are blacks the only group that equates success with working in a White corporation, government or the entertainment industry? - How did power and wealth - businesses, resources, privileges, income and control of all levels of government get so disproportionately distributed into the hands of White society?

Picking up where Black Labor, White Wealth left off, PowerNomics: The National Plan is the missing link between the historical analysis of problems facing blacks and the strategies needed to correct those problems. Dr. Anderson’s books are a phenomenon in the publishing industry. His work is distinguished because he has turned books that are serious, non-fiction, and heavy on black history, into best-sellers. PowerNomics: The National Plan continues that pattern. It is an astounding work.

Tell us what do you think about PowerNomics: The National Plan to Empower Black America.