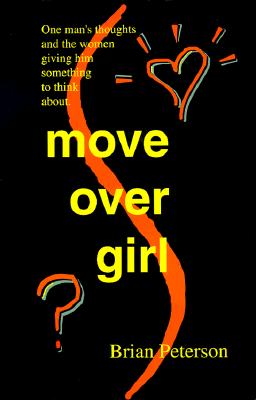 Move Over Girl
by Brian Peterson

Move Over Girl is the story of college junior, Tony Norris, a self-admitted borderline "player" still aching from deciding to walk away from his first love, basketball. Journey through Tony’s world as he attempts to come into his own concerning the various relationship issues in his midst, as well as the unsuspecting drama that campus life and personal responsibilities can bring. Along the way, meet Tony’s crew and the women in his life, painted so well through rich dialogues and reflections that you’d swear you knew them (or someone just like them!)

“Something inside of me always holds me back from going all out with a girl and letting my emotions become too involved. I never really give anything or expect anything in return. Was it the rules I set up for myself before I even get with anybody, preventing me from getting too close because I categorized our relationship either as a) purely physical, or b) seeing each other/just kicking it? What happened to c) boyfriend/girlfriend? When did that fall off the option list?”

Tony Norris is a college junior caught up in the drama of campus life. In this coming-of-age tale, Tony attempts to make sense out of his past mistakes, his current unfulfilling scenarios, and his blurry future.

RATING: 5 Buttas (out of 5)
“Move Over Girl is one of the best books I”ve read in 98. It follows a Black male college junior through his life and loves, and it is so hilarious yet thought provoking. Brian Peterson may just be the next big thing.” —from Butta’s Book Reviews.