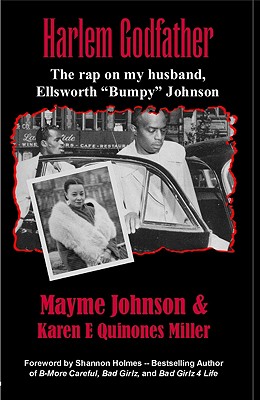 Read Our Review of Harlem Godfather: The Rap On My Husband, Ellsworth “Bumpy” Johnson

To My Guys this is A must read. It not just the about streets and how no mafia Ever Controlled BUMPY! He was The BOSS. But it's about HISTORY, in Harlem U.S.A NYC. Thank You Mayme Johnson for giving the world this jewel may you rest in PEACE. You & Ellsworth Bumpy Johnson.

The first and only full biography on legendary Harlem gangster, Bumpy Johnson who was depicted in the movies Cotton Club, Hoodlum and American Gangster Al Capone may have ruled Chicago. Lucky Luciano may have run most of New York City. But from the 1930s to the late 1960s, when it came to Harlem, the undisputed king of the underworld was Ellsworth Bumpy Johnson. Bumpy was a man whose contradictions are still the root of many an argument in Harlem. But there is one thing on which both his supporters and detractors agree in his lifetime, Bumpy was the man in Harlem. Harlem Godfather: The Rap on My Husband, Ellsworth Bumpy Johnson is the first complete biography of a man who for years was Harlem s best kept, and most cherished secret. There is also a full chapter on Madame Stephanie St . Clair, the infamous Harlem numbers banker who instigated the famous fight with Jewish mobster Dutch Schultz. The book is written by Bumpy’s widow, Mayme Johnson, and details not only his criminal life but also his personal life. This book also details Bumpy’s relationship Harlem dopedealer with Frank Lucas, who has called himself Bumpy’s right-hand man, but was — according to Mrs. Johnson — little more than a flunky.

“When I heard that the Harlem dope dealer, Frank Lucas, wrote a magazine article a few years back claiming that he was Bumpy’s right hand man, and that Bumpy died in his arms I was upset. He lied.”

And when I watched the BET episode of American Gangster featuring Frank Lucas I was furious the people with me wanted to turn off the television. Saying that he stayed with me and Bumpy for six months. Did anyone notice that he said we lived on the corner of 121st Street, and then he pointed to a brownstone and said, "Right there. My boss lived right there?" Well, Bumpy and I lived on 120th Street. 2 West 120th Street to be exact. And we lived in an apartment building (apartment 3I), not a brownstone. Now do you see how Frank lies?

Frank was little more than a flunky to Bumpy, and a flunky whom Bumpy never fully trusted. Frank — Bumpy said — was a liar, and it’s easier to trust a thief than a liar. A thief, Bumpy reasoned, steals because he needs money; a liar lies for the hell of it.

Now why would Frank tell such lies? Because he figures that since Junie Byrd, Finley Hoskins and Sonny Chance — all of whom were then when Bumpy died — are all dead and there’s no one alive to reveal the fact that he’s lying. Maybe he’s figured I’m dead, too. Well, he’s wrong ’ I’m 93, and old ’ but I’m still kicking (not as high as I once did), and I have all of my mental faculties.

There have been legends, myths, and rumors flying around about Bumpy for decades, and I’ve never spoken to confirm or deny any ’ even when the movie Hoodlum was released in 1997, and contained all kinds of factual errors about the man I love. But now I’ve finally decided to speak out. To set the record straight. To tell the truth and damn the devil. To let the world know about the real Bumpy Johnson.

Karen E. Quinones Miller is my collaborator for Harlem Godfather: The Rap on My Husband, Ellsworth “Bumpy” Johnson. Karen grew up in Harlem, and she met my husband when she was a young child.

Let me also say that I’m sure that even reading this you may have some doubts as to whether I’m capable of writing a book. Well, yes, I am. No, let me rephrase that. I don’t know anything about writing a book, and that’s why I have Karen. I am, however, capable of telling Karen what needs to be in this book. I might be 93, but I’m not senile, I don’t have Alzheimer’s disease, and I don’t suffer from dementia. And heck, I can even stay up late enough to watch the American Gangster series on BET! If any of you doubt this, make sure you come to the book launch party for Harlem Godfather ( we want to encourage everyone to come dressed as gangsters back in the 30s and 40s, and we’re going to have a costume contest) and I’ll tell you myself.