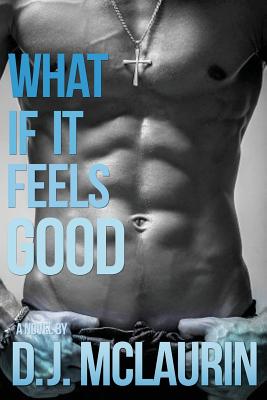 What If It Feels Good
by D. J. McLaurin

Michael Bagley, street savvy and beautiful, learned the art of the con and sleeps with older women to survive. When an accidental shooting sets off a citywide manhunt and thrusts Michael into certain danger, his mother, a stripper at a local nightclub, is finally forced to confront the biological father who didn’t know Michael existed. Soon, Michael finds himself whisked off the streets of Detroit and into a world of champagne dreams with more money at his fingertips than he ever thought possible.

But Michael’s life takes a bizarre turn as he bonds with his newfound father’s best friend. Chachi is a charming, down-to-earth ladies’ man, who awakens sensations Michael can’t explain, throwing him into identity turmoil. When the dust settles, Michael learns that neither riches, fame, nor age has anything to do with love.

As Michael struggles to find his place in a new world, he hopes the streets have toughened him enough to hold on to a secret relationship that may be against the odds and out of his league, and win the fight for the love of his life.

More books like What If It Feels Good may be found by selecting the categories below: