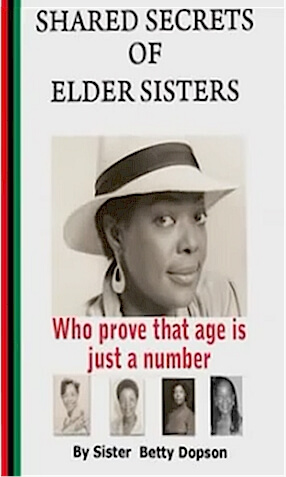 Shared Secrets of Elder Sisters: Who Prove that Age is Just a Number
by Betty J. Dopson

Sister Betty Dopson has written her first book. Or maybe I should say “our” first book, because she wrote it for us—we Black women, and it’s appropriately entitled: Shared Secrets of Elder Sisters: Who Prove that Age is Just a Number.

Synchronicity is everything. I distinctly remember asking Sister Betty, at the recently held African Voices Awards Ceremony in June, what her beauty secrets were. Though she had just turned 76, she looks as though she was in her mid-40’s. She just smiled, but didn’t say a word about this book. So when I got the call from her to cover her book opening at Sista’s Place in Brooklyn, on July 10th, I thought, &ldsquohow did she write that book so fast?”

Most people think of beauty in frivolous terms. But it’s much more than that. It’have been weighed in the balance and found wanting by most mainstream (WASP) criteria.

But Sister Betty re-establishes the fact that beauty is not only more than skin deep, it goes to the very core of who we are. It includes Betty’to Eclectically Black women of all ages and origins—African, African American, Caribbean.