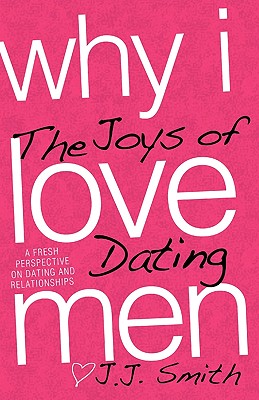 Why I Love Men: The Joys Of Dating
by J.J. Smith

How to become the woman every man goes gaga for… you might think you know what men truly want, but I’ll give you a hint: it isn’t what they’re telling you! Learn specific strategies that help you become an exciting and highly desirable woman without sacrificing your integrity or morality

How the first seven years of your life plays a critical role in your ability to attract satisfying relationships to this day—and what you MUST do first before you can break the self-perpetuating curse that destroys your ability to find true love, or just a partner who genuinely respects you!

How to subconsciously send a signal to other men that you have value and deserve respect, admiration and recognition… without saying a single word out loud! It’s like walking into a room with a beacon of light on your head and a flashing sign that says "I’m different than any other woman in here, and you can’t help but to be attracted to me!" (this is one of the most powerful techniques I’ve ever discovered and it works as if by magic!)

Most women understand that you must put yourself first—they’ve heard it a million times, but they just don’t know how! This one took me years to figure out, but when I did the instant change it brings is like night and day!

Before you begin the dating process, it’s absolutely crucial for you to understand your personal RMV (Relationship Market Value) which helps you determine WHEN you are truly ready for a successful, happy relationship and how to attract the right man for you!

There isn’t a single man alive who can resist looking at an attractive, sexy woman. Even if you don’t think you could ever be considered attractive or sexy, you’ll get the surprise of your life when you read, digest and start applying these celebrity make-over secrets you’ll find in this book!

Twelve techniques you can begin using TODAY to bring out the "sexy" in you and start gaining some attention as early as tomorrow night! (And most of these don’t even require you leaving your house!)

Some extremely important things you need to do and learn if you want to understand men better. Doing these simple things will give you a much better idea of what men think about women. This gives you an uncanny ability to decipher what’s going on inside his head when you’re just getting to know him!

Six characteristics of divas you should begin modeling right away to become incredibly confident and ooze with insatiable sex appeal… you’ll even learn how to become the center of attention wherever you go!

Uncover which one of five potential roles you will play in any relationship… know what these roles are, and how, why and IF you should play them. If you don’t choose which role you will you play from the very beginning of the relationship, he’ll choose for you and will expect you to either play your role, or exit stage-left!

Sometimes it can be hard to determine if a man is right for you. Or, maybe your intuition tells you he’s no good for you, but you stay in the relationship and desperately try to make it work. In this book, you’ll learn how to identify a mate who is a perfect match for what you’re looking for in a great guy!

Secrets of the *Reversed* 80/20 Rule, and how following this golden rule for every man you meet could propel you into the most meaningful, enjoyable and fulfilling relationship of your life. Too often women totally get this wrong and end up letting what would otherwise be "the perfect guy" slip right through their fingers without realizing the damage they’re doing!

The dating game just isn’t what it used to be—and the ways to meet and date men have undergone a drastic transformation. In the past, women typically met men in grocery stores, gyms, bars & lounges, exercise centers and car shows. These places can still be effective, but they have also gotten stale and withered from the times. In this book, you’ll learn five HOT, new ways to meet the kind of men you want—easier than ever before!

One of the most important things to consider on a first date is the location… that’s because the location affects the way you and your date are able to interact with each other. Learn four GREAT locations for getting to know the real him, and get him communicating openly with you… and also learn four TERRIBLE places to go on a date that will only waste your (or his) time and money… and will mercilessly rob you of interacting with him at all!

How to communicate on a first date — even when everything else is going well up to the point of getting him interested to the point of asking you out on a first date, it can all be ruined as quickly as it began unless you follow these vital rules for communication… Know what to say and exactly how to say it to keep him absolutely enthralled with every word that comes out of your mouth!

Have you ever met a guy and you thought you hit the jackpot, but then he never called you again? Chances are, it was your fault. Learn why it is your responsibility to identify and fix your "fatal flaws" that make you less attractive to men. They’re called ’fatal’ because typically these are THE deal breakers in any relationship!

If you don’t have one of these when you meet a man, you are doomed to quickly become clingy and desperate, and try to attach yourself to his life. Learn what you must NEVER do, and why doing this could mean the "kiss of death" before your relationship even has the slightest chance for survival!

Many single women jump in and out of relationships because they don’t want to be alone. But there is a MAJOR difference between being "lonely" and "aloneness." Once you learn how to truthfully separate these from one another, you will never be lonely again. You’ll have a life full of family, friends and amazing dating experiences!

Why doing "all the things HE wants to do" can murder your motivation to live your own fulfilling life and eventually causes you to resent the very person you tried so hard to attract in the first place—instead, try an approach in the book to maintain a healthy balance and keep the fires of passion burning bright as the sun!

Before getting too serious with a guy, you need to be sure to ask him some innocent (but very revealing) questions to quickly get to bottom of who he is, what he does and how he lives his life. Learn eight of the most important questions you can ever ask a guy to cleverly uncover any clues for major personality flaws or "red flags" that’ll tell you right off the bat if he’s the right guy for you!

And much, much more…

Books similiar to Why I Love Men: The Joys Of Dating may be found in the categories below: